The small painting being offered on Thursday

measuring 34 cm square (13 inches), features Tintin and his dog Snowy emerging from a porcelain jar in front of a menacing depiction of a Chinese dragon. 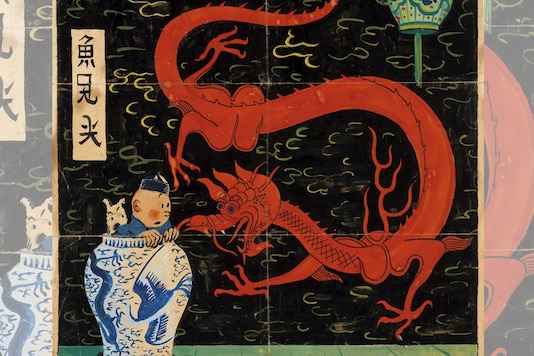 The online sale is widely expected to confirm the huge appetite for memorabilia of Tintin, whose adventures have entertained people of all ages since the 1930s.

The previous world record for comic book art was set in 2014, when a double-page ink drawing that served as the inside cover for Tintin volumes published from 1937 to 1958 sold for 2.65 million euros ($3.6 million at the time).

Tintin and his dog Snowy emerging from a porcelain jar in front of a menacing depiction of a Chinese dragon.It was intended for the cover of “The Blue Lotus” from 1936 but was judged too expensive to reproduce by the publisher, which ultimately used a simplified version of the same scene, auction house Artcurial says.

The volume, the fifth in the Tintin series, is considered a milestone in Herge’s development of the character with its more dynamic and realistic storylines alongside his meticulous artwork.

The auction house estimates it will sell for 2.2 to 2.8 million euros, despite clear fold marks. The sale had originally been set for November.

In 2016, an original drawing from Tintin’s “Explorers on the Moon” book sold for 1.55 million euros, a record for a single comic book page.

Herge, a Belgian whose real name was George Remi, sold some 230 million Tintin albums by the time of his death in 1983.

According to the owners — heirs of the Tintin publisher Louis Casterman — the drawing on sale Thursday was given as a present by Herge to Casterman’s son, who kept it folded up in a drawer.

Other experts have cast doubt on this, saying the drawing might have been folded by Herge himself when he sent it by post to his publishers.

“The theory that it was a gift to a child is outlandish,” Benoit Peeters, a Herge expert who wrote a biography of the author, told French daily Le Monde in September.

“When Herge gave away sketches or drawings he always dedicated them, let alone for the son of his editor,” Peeters said.

“What’s most likely is that Herge never asked for it back, so it was given to Casterman’s son.”

Nick Rodwell, the British husband of Herge’s second wife and rights holder Fanny Vlamynck, has said the work rightfully belongs in the Herge museum in Belgium.

Pk vs West Indies live streaming: When and where to watch...

All Your Questions About Sex During Pregnancy

Emirates suspends flights from India till August 7; Etihad ’till further...

Working from home is often beneficial in some ways, but it also can present several physical, mental, and social challenges. Health tips for those...
Read more
Magazine

Weight loss ultimately comes back to the concept of calories in, calories out: Eat but you burn and you’ll reduce. And while it’s possible...
Read more